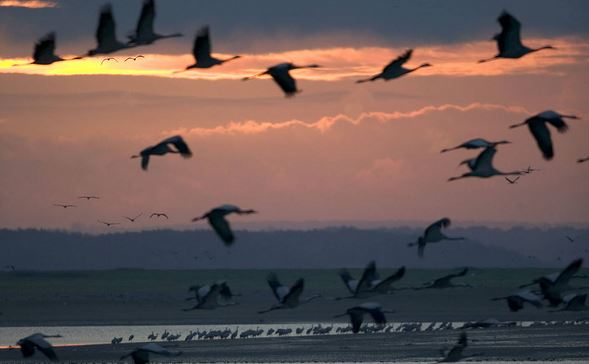 the investment impact of recent events

I spent last Sunday in the elusive pursuit of grus grus, in the upper Marne basin, East of Paris. For some reason the Common Crane had already left in a bid to cross Central Europe, heading for the Artic, weeks earlier than in most seasons. Clearly, they knew something about the airspace ahead of them.

While the largely empty Lac du Der, also had lessons on levelling up; here was a vast and disruptive engineering scheme, it seemed executed without too much controversy, operating well and with the surrounding villages wealthy, quietly prosperous and largely content. Or so it looked in the February sunshine. It was all in pretty harmonious concord with nature too.

It seems the French can see the grand scope of government, the need to provide top class infrastructure. Here is their France Relance plan up to 2030. Up to 3-4 billion Euro is likely to be spent in 2022 alone.

The issue is perhaps not just politics, but the unspeakably low quality and lack of vision of the UK governing class. The French cities have retained their great buildings, the administration is a high profile and visible force, not something to park in the burbs, having ejected them from city centres to grab their assets for still more rentier housing. Nor does the state foolishly aim to do everything, the peage (and TGV) enable high class fast communication, but certainly not always for the lowest price. Nor is health care completely and absurdly free, irrespective of demand. But it is effective.

Power is cheap and plentiful, no hysteria about nuclear there, and the military proud and visible, even the transport police are packing heat. So, watch that off peak ticket schedule.

Of course, not all is rosy. COVID hysteria still ruled, masks and vaccine passes were required for everyone, for everything.

Yet if any UK government is serious about leveling up, (as in the recent White Paper) here is both a lesson, and an indication that Gove’s piffling attempts are a mockery; he needs more like £48 billion to start it, not £4.8 billion.

You feel they just picked up the easy option from the choices their tired civil servants had suggested. Perhaps it was the one that said, “No real impact, but sounds OK for now”.

Ukraine? Not a lot to add to that. We were wrong that Putin was not stupid enough to do it. Wrong too that it would be over in hours. So, treat our topical ignorance with care. Also, wrong that the West would shilly-shally over piecemeal sanctions. Whether we are wrong yet again in assuming that without a quick win, the sanctions will now damage the global economy quite badly, remains to be seen. I also suspect seizing Central Bank assets can only be done once and once done, global finance and investment will become far more fractured, forever.

But in truth, it was going that way already.

However, this blind market panic seems absurd. I really doubt if Putin, at this point, wants to line his battalions up on a border to provoke NATO, who are I suspect closer to an aerial counter strike than he thinks, and would indeed now love the excuse of any incursion on NATO soil.

He has made it into a popular potential war for the West, the most dangerous sort.

It looks to me as if Russia wants a pincer movement, to isolate Ukraine’s forces in the Donbass, plus a threat to Kiev to topple the government, but has he the muscle to take and hold all of the vast country? Even if he does, that does not suggest he will go further than Ukraine, just now.

While his aims are so blatantly false, success can be easily claimed for almost any outcome.  So, a collapse in currencies, and stock markets across Eastern Europe, looks an exaggerated response. True, this is Germany’s worst nightmare come true, no competent military and a gun-shy US, so they must now realign fast, and where Germany goes, so goes the EU. It is not going to fold or fissure in the face of this explicit threat. Although Germany at heart is much more like the UK than France; rapid execution will not be quite as easy as simple announcements. Remember the farce over moving Tempelhof airport?

(link to the article)

As yet, the final step of directly locking in Russian energy supplies, large parts of which go to German consumers, has not been taken, but that would, in the short term, be very costly.

Although high taxes on energy give governments a great incentive to let prices rip, (and demand destruction is great for the climate lobby too), but they are rather less popular at the ballot box.

Meanwhile Powell remains determined to stay behind the curve on rate rises, it is as if the received wisdom on rates, indeed on Central Bank power, has been quietly ditched, and instead he is hoping inflation burns itself out through demand destruction/supply creation. Well, an interesting experiment, but if that’s the game, as we have predicted for a while, inflation will remain gently smouldering, but rate rises will still be very gradual.

The Fed should have turned off the monetary stimulus and reset to ‘normal’ six months ago, by the time they finally move, it will be a full twelve months late. Real rates are deeply negative, levels not seen in decades, and moving fast, this is really not quarter point stuff.

All of the above implies on-going nominal economic growth, ongoing share price appreciation (at least in nominal terms) and an ongoing reward for borrowing to excess.

But despite the rush to safety currently supporting the US dollar (and US assets) the danger to markets is not just from the noisy, tragic, East but also from experimental monetary policy in the US.